That is correct! I read what turned out to be one of the best Sci-fi books I’ve ever had a chance to get my hands on! Even though I read this back in June of this year (Thank you NetGalley and Crown Books for the ARC!), I still cannot stop thinking about it. 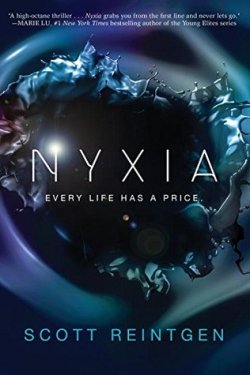 Emmett Atwater isn’t just leaving Detroit; he’s leaving Earth. Why the Babel Corporation recruited him is a mystery, but the number of zeroes on their contract has him boarding their lightship and hoping to return to Earth with enough money to take care of his family.

Before long, Emmett discovers that he is one of ten recruits, all of whom have troubled pasts and are a long way from home. Now each recruit must earn the right to travel down to the planet of Eden–a planet that Babel has kept hidden–where they will mine a substance called Nyxia that has quietly become the most valuable material in the universe.

But Babel’s ship is full of secrets. And Emmett will face the ultimate choice: win the fortune at any cost, or find a way to fight that won’t forever compromise what it means to be human.

Set in a not-so-distant future, we follow Emmett, a troubled kid from Detroit, and 9 other teenagers, picked by Earth’s largest corporation from all around the world. They only have one thing in common – they are desperate and will sign any contract for the promised wealth. And now they are all dispatched on a mission they never could have imagined.

1 – Besides my obvious love for Sci-fi and dystopian novels, the concept behind this book really surprised me. I can’t say that it is something we’ve never seen before, because there are a lot of movies and maybe even books revolving around “life outside of Earth”, but since I’ve never read anything similar, I was pleasantly surprised and delighted by the story.

2 – I enjoyed the spirit of competition and the competition itself! It gave a slight vibe of «The Hunger Games», definitely far from the bloodthirstiness and survival of the games, but very exciting nonetheless.

3 – I fell in love with the characters! Scott Reintgen has an amazing way of bringing characters to life, all of them being so different and interesting in their own way, all of them with a different background and different personalities. It was an absolute delight to get to know them through the pages of the book!

4 – Unexpected twists and turns, and of course great writing made this book a page-turner that was very difficult to put down, once I started reading it. And after finishing it, I immediately started craving for the continuation, because CLIFFHANGERS ARE EVIL!

5 – Finally, I was so happy that the story had almost no romance! I mean.. after reading tons and tons of fantasy / sci-fi etc that were swarmed with romance, I can appreciate a lack of thereof and heavy action packed plot as a compensation!

There was not a single thing that I disliked about «Nyxia» by Scott Reintgen and I am beyond excited for the next book in the series. Take my word for it and PLEASE READ THIS ASAP! And once you do, I really would love to know what you thought about it! Because I feel like this book is impossible not to like!

Let me know in the comments down below if you are interested in reading «Nyxia» and also what other September release you are anticipating the most!

13 thoughts on “Nyxia by Scott Reintgen | Simply one of the best Sci-fis I’ve ever read!”