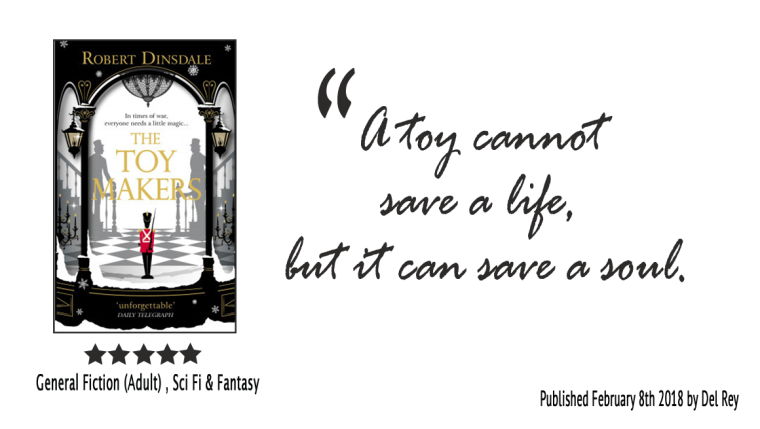 No matter how many books I devour every year, it is incredible to see that there are still books out there that are able to amaze me with beautiful, emotional writing, magical settings, and touching events.

This was my first book by Robert Dinsdale and it definitely won’t be the last one! I am still battling with my inner self whether I should add this book to my 2018 favorites list or not. If I would have a “2018 most memorable reads” shelf, it would automatically earn its place there.

Do you remember when you believed in magic?
The Emporium opens with the first frost of winter. It is the same every year. Across the city, when children wake to see ferns of white stretched across their windows, or walk to school to hear ice crackling underfoot, the whispers begin: the Emporium is open!

It is 1917, and London has spent years in the shadow of the First World War. In the heart of Mayfair, though, there is a place of hope. A place where children’s dreams can come true, where the impossible becomes possible – that place is Papa Jack’s Toy Emporium.

For years Papa Jack has created and sold his famous magical toys: hobby horses, patchwork dogs, and bears that seem alive, toy boxes bigger on the inside than out, ‘instant trees’ that sprout from boxes, tin soldiers that can fight battles on their own. Now his sons, Kaspar and Emil, are just old enough to join the family trade. Into this family comes a young Cathy Wray – homeless and vulnerable. The Emporium takes her in, makes her one of its own. But Cathy is about to discover that while all toy shops are places of wonder, only one is truly magical…

Early 20s century, we follow Cathy Wray as she runs away from home and to the Emporium, London’s most magical place. A toy shop opened every year from the first frost. «Running was easy, she decided; but every runaway had to arrive, and arriving seemed the most difficult thing of all.»

Kaspar’s and Emil’s characters, masterfully written, brought something whimsical into the story. While Kaspar, the eldest and more successful at creating new magical toys, was often deep in his self-centered world, Emil – envious of his older brother, showed his softer and more compassionate side. But even in closed up from the rest of the world Emporium, things could not remain the same. Not when the War was so near.

Robert Dinsdale carefully crafted the paths of our characters. Sometimes reading a book on Kindle, I don’t realize how long or short the novel is. And I had to check the page count on GoodReads, because while we followed the main characters from the early teenage years until grey hairs, not one time did I feel like the story was too long or on the contrary lacking something, even though the whole plot was delivered in mere 320 pages.

Which made me wonder, has Robert Dinsdale learned from Papa Jack how to stretch dimensions, or is it all about perspectives?

And what about Cathy? Cathy Wray, whose character has developed more and more with every page. How brave and foolish she was in her teens, and how the Emporium and its inhabitants have changed her. The dynamics between Cathy and Kaspar, or Cathy and Emil, made me hold my breath for the entire length of the scenes. And the final plot twists were so unpredictable that I had to re-read the events a few times to see that it wasn’t just my imagination.

Besides the intricate relationships and bewildering deeds, a big chunk of the plot was dedicated to soldiers, tin soldiers from the Emporium toy shop, but just as alive as any other soldiers defending their countries during long, savage war.

I loved the enchanting illusion that came to life every time I picked up this book. And I loved how Robert Dinsdale incorporated many raw, cruel topics in the story. However, for me, the tin soldiers and their adventures were taken too far, and slightly spoiled my enjoyment of the book.

Thank you, NetGalley and Penguin Random House UK, Ebury Publishing for the free ARC of this book in exchange for my honest review.

Have you read any of Robert Dinsdale books before? Are you interested in reading «The Toymakers»? Let me know in the comments down below!