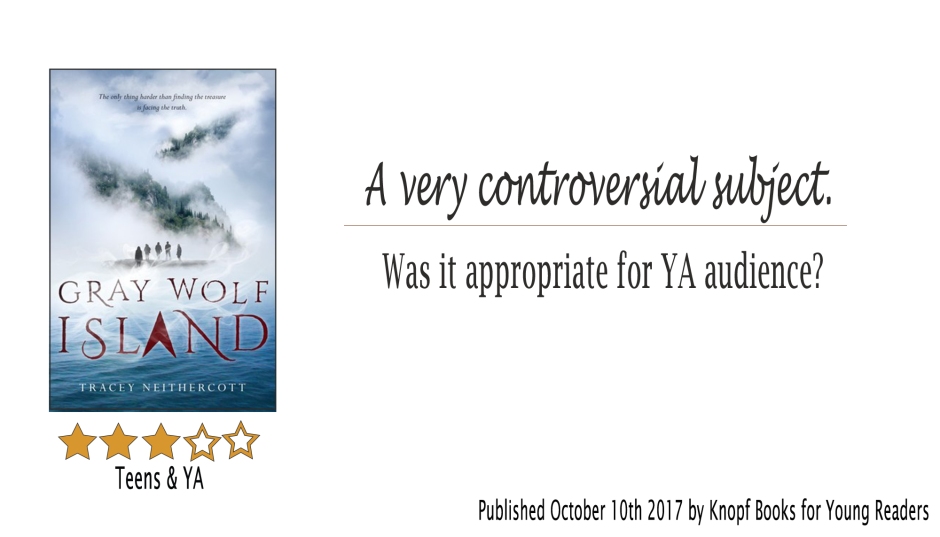 Sometimes it feels like authors have gone too far. I believe that YA is separated from Adult for a reason, not just because the characters fall into a certain age category but also because there are certain issues, subjects and problems that can be brought up in Adult literature and need to be carefully presented, if at all, in YA.

This one of those books.

Over the time, as I read more and more YA, it became certain that the characters in these books deal with wide array of emotions and feelings, from grief to guilt, from sexuality to friendship, and so on.

Also, YA is so widely read by younger generations (and even older) that it leaves huge impact on readers and their views of the world.

«Gray Wolf Island» made me feel some very complex emotions. At points, it even made me angry. Angry at the possibilities that it would brainwash younger readers and give them wrong perspective over death, mercy, murder.

Right before Sadie died, she begged her sister, Ruby, to do the one thing she could never do herself: Find the treasure on Gray Wolf Island.

With just a mysterious treasure map as a guide, Ruby reluctantly allows some friends to join her on the hunt, each of whom is touched by magic: a boy allegedly born to a virgin, a girl who never sleeps, a boy who can foresee his own death, and a boy with deep ties to the island. Each of them is also keeping a secret—something they’ll have to reveal in order to reach the treasure.

As the secrets come to light, Ruby will have to decide: Can she make peace with her friends’ troubled pasts and continue to trust them? Can she forgive herself for doing the unspeakable? Deep in the wilderness of Gray Wolf Island, Ruby’s choices will determine if they make it out with the treasure—or merely with their lives.

Ruby made a promise to her dying twin, that she will go on the adventure that Sadie always wanted for herself and find the treasure. When she finds her first clues, there is no backing away for her, as she has to keep the promise.

The book is filled with whimsical elements. There is a girl who never sleeps, there is a boy born from a virgin, there is a boy who could see his own death. And of course, there is the Gray Wolf Island that kept its secrets for centuries.

We don’t only see the story from Ruby’s perspective, we also read if from the boy deeply connected to this Island. And to tell you the truth, his story was far more fascinating to me.

All of them are keeping secrets and, as the blurb says, they will need to reveal them before the Island allows them to uncover the treasure. I liked the idea of having to deal with your conscience and consequences of telling the truth. This issue about the truth was also supported by heavy burdens the characters carried with them, the dark secrets that they kept hidden.

What I didn’t like was the presentation of mercy through murder. Now, this might be a very controversial subject. It’s definitely not something most people take lightly. For example, is it mercy when doctors or family decide to turn off the life support? It is definitely not legal in all countries, but the fact that some countries accept it, makes it even more problematic.

Considering that this book is mostly for teenagers, that haven’t yet formed their views on the world in general, I would dare even call «Gray Wolf Island» a bad influence!

I don’t judge it by presenting a point of view, I judge it for telling young people that murder and mercy can go hand in hand.

Right after finishing the book, I gave it 3 stars, because it wasn’t bad but it wasn’t great either. After this long rant, I am not sure anymore if it deserves any rating from me. So I decided to leave it rated as it was on GoodReads, but I won’t be rating it in this post.

Thank you NetGalley and Knopf Books for Young Readers for the ARC of this books. It was definitely not a boring read!

Have you read this book? Am I judging it too harsh?

One thought on “Gray Wolf Island by Tracey Neithercott | A very controversial subject. Was it appropriate for YA audience?”